The Childhood Apraxia of Speech Checklist 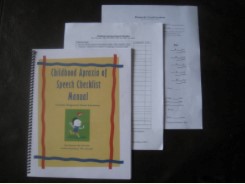 The Childhood Apraxia of Speech Checklist is not a diagnostic test and should never be used alone to diagnose childhood apraxia of speech (CAS). It is one of several tools that could be used to diagnose CAS. It is a checklist of 20 characteristics of CAS that could be found in research articles at the time it was constructed in 1996 to help confirm suspected childhood apraxia of speech (then called developmental apraxia). One of the historic problems with diagnosing CAS has been the lack of agreement on both the characteristics of apraxia and the wording used to describe those characteristics, a problem that was helped by the ASHA ad hoc committee position statement in 2007. Consequently, the checklist has been updated to recognize the characteristics that are recognized in the ASHA position statement and in more current studies on the characteristics of CAS. The checklist includes two of the top three features (problems with prosody and two types of inconsistency) recognized in the ASHA position statement on Childhood Apraxia of Speech and seven of the secondary ones.

Since it is not a test, The Childhood Apraxia of Speech Checklist is not constructed as one, using such elements as standardization, validation, and reliability. It does include data collected over a 14 year period on 92 children who were administered the checklist in an effort to try to confirm or rule out suspected CAS. The results that have been collected have fallen into 5 groups of classification ranging from not apraxic to severe apraxia with other concomitant disorders. Since 70 of these students have been followed up in therapy, data has also been collected on the progress of these case studies that have been used to formulate some prognostic implications. All of the CAS Checklists used for the collection of data have either been administered by Kay J. Giesecke or by a coworker in collaboration with Giesecke in order to ensure consistency in administration.

The SLP administers a standard protocol for a speech-language evaluation and a few extra items such as the vowel inventory that accompanies the checklist. Sometimes the SLP needs to work with the child in diagnostic therapy before she can complete the checklist. The information gleaned from the evaluation, parent interview, observation, and diagnostic therapy is used to determine the presence or absence of CAS characteristics. A suggested protocol, instructions for administration, data on the checklist, prognostic implications and case studies are included in the manual. The CAS Checklist comes with a pad of 50 checklists, a pad of 50 diagnostic vowel inventories, and a manual. The cost is $100, including tax and shipping. If you have a tax number or would not like to pay with PayPal, please email us at info@apraxiaaustin.com

If you have any questions about the products listed above, feel free to contact us and learn more!
Contact Us